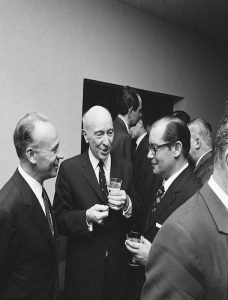 © European Communities, 1970, EC Audiovisual Services.
Judge Riccardo Monaco, Judge Robert Lecourt and President of the Commission Franco Maria Malfatti (1970). While Robert Lecourt was president of the ECJ the Court decided the case C-43/75 Defrenne II. Paragraph 12 of that judgement read: ’This double aim [of Article 119], which is at once economic and social, shows that the principle of equal pay forms part of the foundations of the Community.’